SEMINAR - "Within arm's reach: School neighbourhoods and the availability of food and drink"


FoodNet and ReACH from the University of Hertfordshire are hosting a free seminar exploring what young people are eating and drinking in and around school. Check out the flier below for more information... 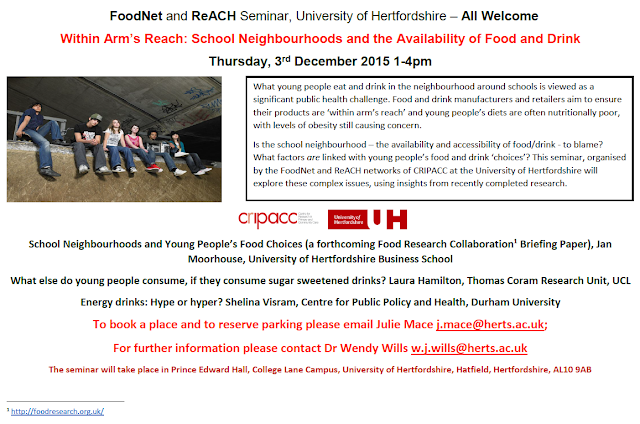 Posted by HBSC England at 04:57 No comments:

Consumption in teens: an infographic

The HBSC England team are keen to work with young people when disseminating our research. Recently the team were joined by Harrison, a 15 year old student undertaking work experience. Harrison was tasked with presenting the latest HBSC England data (full report here) in a more interesting and accessible format. He created the wonderful infographic below...

Harrison also created an infographic about young people's health. Check it out here.

Posted by HBSC England at 04:47 No comments:

Health in young people: an infographic

The HBSC England team are keen to work with young people to disseminate our research. The infographic below was created by Harrison, aged 15 years. It presents the latest HBSC England data (see full national report here) in an attractive and easily accessible format. We think it looks fantastic! What do you think?

Harrison also created an infographic for data on consumption in teenagers. Check it out here.

Posted by HBSC England at 04:37 No comments:

The following blog post was written by Harrison, 15 years old, during his work experience with the HBSC England team. After studying the latest HBSC England national report, Harrison has reflected on the findings and given an insight into the lives of young people. It is a fascinating read...

During my work experience, I took some time to read through the recent HBSC England report. There were a few figures and points that I found interesting, and even some that I felt could benefit from a young person’s input or explanation. I thought I’d try to sum up some of the reasons that I see for a distressing increase in self-injury behaviour (1/5 of 15 year olds have self-harmed at some point in their life) and mainly reasons for stress in teens.

In some cases, problems stem from home life. From personal experience, you can really tell when something’s wrong at home just from how someone acts around you, and sometimes the person feels like they can’t tell anyone in fear of making it worse for themselves or passing on a burden. In fact, it is very important not to internalise stress or depressive thoughts; this is often a cause for self-injury behaviour. With a decrease in young people living at home with both parents, this could be seen as one reason for the increase in self-harm among adolescents.

However, it isn’t only the stress from parental events that can affect someone’s self-injuring tendencies. A hugely influential factor, across all social groups and walks of life, is communication and support. The combination of many middle-aged parents being stereotypically hard to approach about personal subjects and stereotypical reserved, vague teens often leads to breakdowns in communication at the most crucial times in a young person’s life. Without any encouragement, discussion, advice or opinion from someone more experienced and capable, navigating the quickly-changing life of an adolescent alone can bring stress levels up to a colossal high. It is of the upmost importance that parents make absolutely sure that their child is ok; without guidance and someone to confide in, internal pressure from stress can violently explode in forms of self-harm.

On a partially related note, the rise in support for LGBT rights, acceptance and equality has been hugely noted by the youth. Some have been prompted to ‘come out’ as non-heterosexuals, and the movement is extremely important for teens during their most explorative years to realise what they identify as. With successful campaigns such as the Facebook rainbow ‘profile pictures’ being spread around and used by teens, the movement has helped distinctly with the LGBT teens. In some cases though, the embracing of LGBT activities or ‘coming out’ has led to self-harm behaviour.

Imagine yourself as an adolescent who finds they are bisexual. Now, imagine that your parent/s is/are homophobic. Being surrounded by anti-different ideals and behaviours at home whilst undergoing a transitional phase is, evidently, hard. Having to keep everything to yourself, having to change who you are around others, is going to take a massive toll on you emotionally. Even worse is that if your parents don’t support the LGBT movement, you can hardly discuss the things on your mind with them. And it doesn’t just apply to parents. At school, perhaps not on purpose, homophobic language is everywhere. New coat? That’s gay. Got the answer right when someone else didn’t? Gay. Staying behind after a lesson to consolidate your knowledge, extra revision before an exam, helping someone who doesn’t understand? You get the point. It is easy to see why LGBT teens would feel uncomfortable or unaccepted at school, where they spend most of their days. Of course, ridicule and accusations are going to lead to a build-up of stress and emotional pain. With nobody understanding, you can sympathise with the LGBT community and realise that sometimes the pressures and thoughts become too much.

My final point regarding stress is the one I find the most suited to my experience is regarding age. The 2014 HBSC England report found that young people aged 15 had the most weekly reports of trouble sleeping, with 40% of all 15 year olds identifying it. Sleep loss is both a key indicator and contributor to stress, and this is down to school work. I can tell you with full confidence that GCSEs become your life.  Every lesson is a constant reminder and every hour, minute, second is one closer to the daunting reality of the exams. Even the most well-prepared, almost perfect student will struggle to keep on top of revision, homework, social activities and winding down. With months unfortunately stacking up coursework on top of this, it surprised me that only 40% reported sleep loss more than once a week. This is one pressure that adds to the negative and depressive thinking that some teens show. Another comes from social stigmas. Self-harm is seen as a stigma in itself, those who self-harm being seen as weak or needy. Many of the adolescents may find confessing what they do for this reason. On top of this, the study also showed that in general young people find it harder to talk to their parents as they get older. Honestly this makes sense to me, for several reasons:

a) the problems they’re likely to be facing are generally more private or intimate
b) teens enjoy independence and self-sufficiency
c) puberty brings about a concoction of hormones, making every conversation a ticking time bomb for confrontation
and d) you begin to realise that privacy and sorting issues out alone is important in life.

To conclude, I fully understand why the 15 year old population self-harm the most. A breakdown in communication combined with social and educational stress factors certainly leads towards major problems internally for teens. For this reason, I ask any parents reading this to make sure they have a strong, trusting link with their child and should commit completely to supporting and helping them with stress, especially during year 11.

How a Nuffield Foundation placement helped me...

Over the summer the Centre for Research in Primary and Community Care (CRIPACC) at the University of Hertfordshire hosted five Nuffield Foundation research placement students. Below is a guest blog post from Marium, reflecting on her research placement within the department...

Throughout the course of my project I was working alongside a senior lecturer in dietetics, Jane McClinchy and the CRIPACC team at the University of Hertfordshire. My overall aim was to facilitate a whole research project that investigated the delivery of nutrition information given to patients with type 2 diabetes by community pharmacists.

By working on this project I have learnt that more preventative measures can be taken to control type 2 diabetes without the need for expensive drugs that cost the NHS billions every year. Pharmacists hold a key position within the health care system and more must be done to train them in their roles. Additionally, over the 6 week placement I managed to develop my understanding of how research is conducted in the scientific community and I now feel confident in presenting my ideas to academics.

This project was challenging yet thoroughly enjoyable. Working alongside other Nuffield students gave me a fun and rewarding experience this summer and the CRIPACC team were helpful throughout; I am privileged to have been part of this research centre.

If you want to find out more about the Nuffield Foundation research placements check out Chelsea's blog post about using survey methodology (click here) and Susanna's reflections on using visual research methods (click here).
Posted by HBSC England at 01:12 No comments:

We are launching the World Health Organization (WHO) collaborative Health Behaviour in School-aged Children (HBSC) England National Report today! This Department of Health funded study included over 5000 young people from across England.

The full report can be found here.

The report paints an important picture about the health and well-being of young people in England today and how young people’s health has changed over the last decade. Traditional risk behaviours such as smoking, drinking alcohol, and fighting are declining – with many showing the lowest reported prevalence since 2002. However healthy behaviours such as physical activity and healthy eating have not mirrored these positive changes over the last decade. The report also highlights young people’s emotional well-being as an area for concern.

You will find quotes from young people embedded throughout the report. Youth engagement is an important element of the HBSC England study, and it is important to capture young people’s interpretation of the findings.

Please take a look at the report and share within your networks! 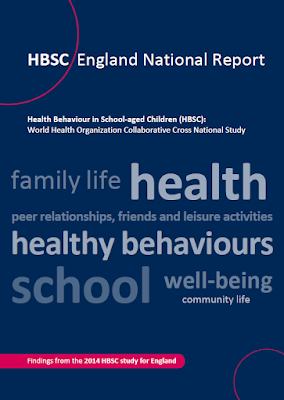 Posted by HBSC England at 04:23 No comments: